Marcel Escoda Alegret was born in Tortosa, on the 27th of December 1966, but came to live in Andorra when he was very young, as his parents moved there in 1969. 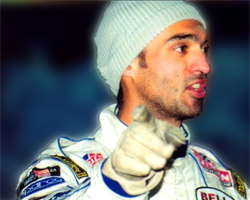 He got his schooling at the French School of Escaldes and after that, at the Collège Comte de Foix of Andorra la Vella. He finished his secondary studies at the Lycée Jean Prévost of Villard de Lans, in which, being part of the Ski Etudes section, he studied at school and trained with the alpine skiing team, and represented Andorra in international competitions.

Later, he moved to Toulouse where he got the degree in medicine at the University of Toulouse-Purpan. Afterwards, he completed his studies in the area of Sports Medicine and Mountain Emergency Medicine.

When he returned to Andorra, he worked as a doctor at the Pas de la Casa-Grau Roig Medical Centre. At the same time, he initiated the creation of Medisport, a centre of sports medicine and physiotherapy, and collaborated with different sports teams and federations as a sports doctor. He He also formed part of the team of creators of EFPEM (the school of sports and mountain professions).

He died on September 6, 2003 in an accident while participating in a car rally.